THE DARK GIANTS OF THE UNIVERSE

Black holes are among the most intriguing and mysterious objects in our Universe and are generated when space and time are warped so strongly that nothing, not even light, can escape.

Observations also suggest that a third class of black holes, known as intermediate mass black holes (IMBH) could exist - with masses that are between those of stellar-mass and supermassive black holes. Some indications for the existence of IMBHs come from observations of very bright X-ray sources, which could consist of an IMBH swallowing a nearby star. Further clues are provided by globular clusters, which are dense groups of hundreds of thousands of stars. The orbits of the stars hosted in these clusters suggest that, in some cases, an IMBH could be located in the cluster center.

IMBHs are very exciting objects as they could shed light on several key astrophysical processes. For example, observations of IMBHs could prove a major breakthrough in understanding the formation of supermassive black holes: IMBHs may have provided the first seeds for the progressive growth of supermassive black holes and, therefore, influenced the formation and the evolution of galaxies. Nevertheless, IMBHs are the most elusive and least understood type of black hole: unlike stellar-mass and supermassive black holes, no compelling evidence for their existence has been collected to date, and moreover it is still debated how IMBHs could form in the first place. Thus, a new method of observation is needed to establish unambiguously whether or not IMBHs exist - and if they do so, to delve into their nature.

NEW EYES ON THE UNIVERSE

An intriguing possibility for direct and unambiguous observations of IMBHs relies on gravitational waves (GWs). GWs are ripples of space-time propagating at the speed of light. According to Einstein's theory of General Relativity, GWs should be generated by moving objects. Even when originated by violent, catastrophic events such as black hole collisions or stellar explosions, however, GWs are extremely weak and very difficult to observe. Consequently, so far only indirect evidence for the existence of GWs has been collected. Nevertheless, if detected, GWs could open new eyes on the Universe. The observation of GWs would reveal the presence and the properties of the sources which generated them, including those sources which do not emit or reflect light, such as black holes.

To emit GWs, a black hole needs to interact gravitationally with another object. In particular, binary systems consisting of two black holes orbiting each other are among the strongest sources of GWs in the entire Universe. The emission of GWs slowly removes energy from the system, causing the binary orbit shrinks progressively over millions of years until the black holes get too close to maintain a stable orbit. In a fraction of a second, the two black holes plunge towards each other and collide, generating a new, more massive black hole. It is during the collision of the two black holes that the binary releases the greatest amount of energy in GWs.

We performed an 'unmodeled' search for GWs in data collected between July 2009 and October 2010 by the most sensitive GW detectors in existence, the LIGO and Virgo interferometers. This search was designed to detect any short GW signal in the data, regardless of its exact waveform, making it particularly well-suited to the brief signals expected from IMBH mergers. The search was sensitive to merging IMBH binaries with a maximum total mass of, roughly, 450 times the mass of the Sun and up to a maximum distance of several billion light years. Although the search could survey millions of galaxies and, therefore, millions of potential IMBH hosts, no IMBH binary merger was detected. We used this result to calculate a limit on the rate at which IMBH binaries merge in the local Universe. To place a stronger limit, the results of this analysis were combined with the results of the first unmodeled search for GWs from colliding IMBHs, performed on LIGO-Virgo data collected between November 2005 and October 2007. For the systems to which our searches were most sensitive - which consist of two IMBHs with masses of, roughly, one hundred times that of the Sun - we found that not more than one collision should occur each year within a range of about four hundred million light years.

Although no merging IMBH binary was observed, the searches conducted on LIGO-Virgo data delivered two important results. On the one hand, the searches illustrated the astonishing sensitivity achieved by the LIGO and Virgo detectors, which allowed us to investigate the Universe across distances of billions of light years. On the other hand, they provided experimental evidence that mergers of IMBH binaries must be very rare. However, theoretical estimates predict merging IMBH binaries to be even rarer than the limit on the rate that our searches allowed us to calculate! Thus, to increase the probability of actually observing colliding IMBHs, a significantly larger volume of space must be surveyed, calling for a great effort to improve the sensitivity of GW detectors.

The sensitivity required to first observe colliding IMBHs, assuming that the theoretical merger rate estimates are correct, may be achieved by the advanced LIGO and advanced Virgo observatories. The advanced detectors are currently under construction and will come online in a few years. This new class of detectors should be sensitive to merging IMBH binaries with total masses up to 1000 times that of the Sun and up to distances which will be larger by more than a factor of ten compared to the previous searches. Thus, the advanced LIGO and Virgo observatories may open the era of IMBH astronomy and reveal, for the first time, some of the most intimate secrets of the Universe.

For more information on how this figure was generated and its meaning, see the preprint at arXiv.org or the associated LIGO Document page. 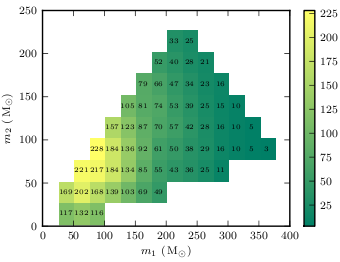 Estimate of the average distance up to which our search was sensitive to colliding IMBHs. These distance ranges were calculated for observations conducted with the two LIGO detectors and the Virgo detector between June and October 2010. The ranges are computed as a function of the masses of the two IMBHs, expressed in solar masses, which are reported on the horizontal and vertical axes. The numbers in the boxes are the estimated ranges for the considered masses. The ranges are expressed in megaparsecs (1 megaparsec is equal to 3.26 million light years).