The joint observation of an astronomical event with both light and gravitational waves would certainly be one of the most exciting discoveries of modern astronomy. The two types of waves are quite different. Gravitational waves reveal insights into the inner workings of a system, whereas light provides information about a system from its surface and its interaction with the surroundings. Therefore the two carry complementary information. By observing a source in both ways we can compare the signals and gain a more complete picture of the astrophysical processes taking place.

Some of the strongest sources of gravitational waves are also expected to produce enough light to be visible from Earth-based and space-based telescopes. For example, pairs of neutron stars release a great deal of gravitational-wave energy as they spiral together (panel 1 in image at right). As the two objects merge, they produce highly radioactive material (panel 2). An accompanying short gamma-ray burst (panel 3) is thought to come from narrow jets of high-energy radiation that blast from the merging stars for about one-tenth of a second. Much of the debris left over from the explosion forms a disk around the merged object, likely to be a black hole (panel 4).

A gamma-ray burst would only be seen if one of the jets happens to be directed toward Earth. However, there are other possible signatures. In a scenario called a kilonova, additional kicked-out radioactive material glows as it decays, emitting optical and infrared light for a few days after the merger. While long-lived, the kilonova is 100 billion times dimmer than a gamma-ray burst. In addition to the light and gravitational waves, the process which produces the radioactive neutron-rich material could also be the source of gold and other heavy elements found on Earth. Most of the lighter elements in our bodies (like carbon and oxygen) were likely created in supernovae, but the source of heavier elements is still a mystery - one that could be solved by observing light and gravitational waves together. While it's true we are all made of star stuff, your gold ring may be made of neutron-star stuff!

During two observing periods ('winter': December 2009 - January 2010 and 'autumn': September - October 2010) computer software quickly analysed data from the gravitational-wave detectors of LIGO and Virgo. Possible gravitational wave signals found in the data triggered alerts to optical telescopes which included the Palomar Transient Factory, Pi of the Sky, QUEST, ROTSE III, SkyMapper, TAROT, Zadko Telescope, and the Liverpool Telescope. These telescopes responded by pointing in the likely direction of the possible gravitational-wave signal. For each gravitational-wave event candidate, images were collected from the first night possible up to one month after the event took place. This technique gave us the best chance of catching a possible event at its brightest and then watching it slowly fade.

Four event candidates were identified by the gravitational-wave detectors and sent to the TAROT and QUEST observatories during the winter run. Four more were identified during the autumn run and sent to all 8 observing partners, and imaged by multiple telescopes. In the images, we sought transient objects which looked like stars on one night, but then became dimmer until they disappeared. We don't know how long this dimming would take, so we considered a wide range of possible time scales. With all the other stars in the night sky, this is not just a search for a needle in a haystack, but a needle made of hay in a haystack. Unfortunately no optical transient was identified with a convincing association with any of the gravitational-wave event candidates, which were themselves consistent with noise fluctuations in the LIGO and Virgo detectors. Despite this null result, this search was the first of its kind, and lessons learned provide an important benchmark for future operations. This will be extremely valuable when Advanced LIGO and Advanced Virgo reach their design sensitivities by the end of this decade, when astrophysical searches triggered by gravitational-wave events are expected to be a regular occurrence.

For more information on the meaning of these figures, see this link. 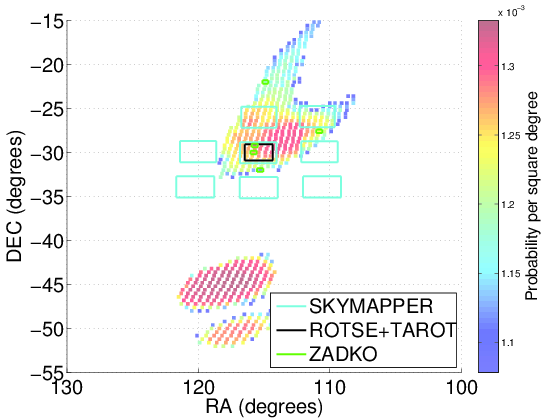 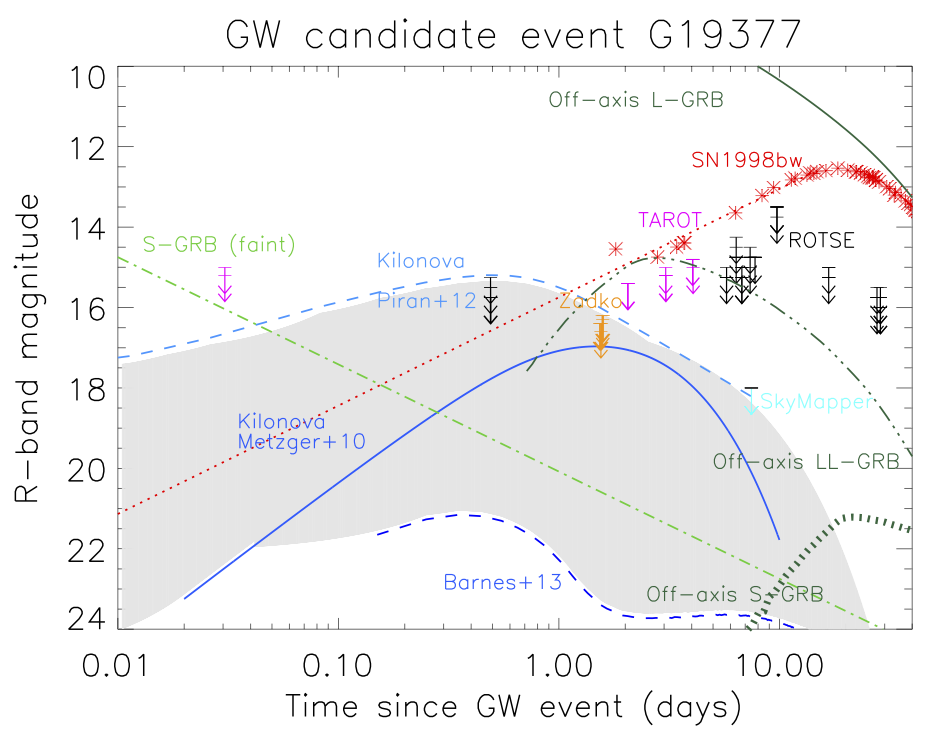 A timeline for event G19377 which shows when each telescope observed the requested regions as indicated in the previous figure. Time zero is the time of the gravitational-wave event candidate. Model light curves for several sources (at an assumed distance of 30 Mpc) are shown for comparison.