How high are pulsar "mountains"?

Einstein's General Theory of Relativity predicts that the motion of masses can lead to the emission of gravitational radiation, commonly called gravitational waves. These waves, which are distortions in the fabric of space-time, ripple out from their sources at the speed of light. Far away from the source their effect is tiny. The distortions from even the strongest sources (which are some of the most violent events in the Universe) stretch and squeeze the distance between any objects they pass by a fractional amount (called the strain) of order 10-23. That is equivalent to a change in distance between the Earth and the Sun of just a few times an atomic radius! However, scientists have built detectors, based on laser interferometry, to perform very high precision distance measurements that are capable of measuring these extremely small distortions. In the US there are two such detectors called the Laser Interferometer Gravitational-wave Observatory (LIGO), in Italy there is the Virgo detector and in Germany there is the GEO600 detector. These are operated, and their data analyzed, by hundreds of scientists from across the world as part of the LIGO Scientific Collaboration and Virgo Collaboration.

One of the ways we are taking advantage of the fantastic sensitivity of these detectors is to search for continuous gravitational waves from pulsars. Pulsars were first observed in 1967 at the University of Cambridge by the radio astronomers Jocelyn Bell and Antony Hewish. They are neutron stars, which are the collapsed cores of massive stars that have run out of fuel and gone supernova (up until this discovery they had just been theoretical objects first proposed by Walter Baade and Fritz Zwicky in 1934). They are very rapidly spinning, with rotation periods ranging from a few seconds to a few milliseconds, so their surfaces are rotating at up to ∼10% of the speed of light! With a mass of slightly more than the Sun (∼2.8×1030 kg) packed into a sphere of radius ∼10 km, they are about 40 000 billion times denser than lead (this is equivalent to squashing the entire population of the Earth into a thimble). They also have magnetic fields a billion to a few thousand billion times that of the Earth. So, these are very extreme objects! The pulsed emission comes from beams of radiation emanating from the magnetic poles of the stars acting like a lighthouse. If the magnetic and rotation axes are not aligned then pulses are observed as the radiation beam sweeps across the Earth once per rotation.

To generate gravitational waves a pulsar must have some non-symmetric distortion that is not along its rotation axis, i.e. a "mountain". This distortion could have been: frozen into the crust or core of the star after it was born in the supernova; formed from material falling onto the star; or, be produced and maintained though extremely large internal magnetic fields (larger even than the external fields described above). However, due to the huge gravitational field at the star's surface the material forming the "mountain" needs to be really strong to not be flattened out (a mountain on Earth made of jello would not get very big before collapsing under its own weight, but one made of solid rock can become as large as, or larger than, Everest). For a pulsar with a crust made up of normal neutron star material the maximum deformation that could be sustained before collapsing is about 10 cm, so not very high for a "mountain" (scaling up in height only this would be equivalent to a ∼50 m hill on Earth). If the star was made up from more exotic materials, e.g. if it were a solid quark star, then it could possibly sustain a "mountain" up to ∼10 m in height. The "mountain" size can also be expressed in terms of the star's ellipticity (ε), which is a measure of its size as a fraction of the star's radius.

Making a few reasonable assumptions we can estimate the maximum amplitude of gravitational waves being emitted by most pulsars. To do this we use the law of conservation of energy. Pulsars are seen to slow down (spin-down) over time. This spin-down takes a very long time, and even the most rapidly spinning-down objects only decrease in frequency by less than a hundredth of a Hertz (or equivalently, increase their periods by less than ten microseconds) over a year. But, given the huge moment of inertia of the stars this still represents a very large loss in rotational energy, corresponding to a power of ∼1031 Watts, or well over ten thousand times the Sun's luminosity. If we assume that all of this energy is being lost by emission of gravitational waves we can calculate the amplitude with which we would observe them at Earth. This is called the "spin-down limit". If we can achieve detector sensitivities that allow searches to reach below this limit then we are probing interesting new territory, where gravitational wave signals could be detectable.

There are just over 350 pulsars (see the Australia Telescope National Facility catalog) spinning fast enough for their gravitational wave emission to be in the sensitive frequency band of the current detectors (∼20 to 2000 Hz). We have searched for a total of 195 of these pulsars using data from the LIGO, Virgo and GEO600 science runs, with the most up-to-date results for 179 of them coming from the most recent LIGO S6 and Virgo VSR2 and VSR4 runs. To help reach the best sensitivity we have used information about these pulsars obtained through radio, X-ray and gamma-ray observations; these have provided very precise knowledge of the pulsars' frequencies, positions and how their frequencies change over time. This information has allowed us to accurately track any potential signal in our data over the whole length of the science run (called coherent integration).

From these searches we were not able to detect evidence for gravitational radiation from any of the pulsars. But, we have produced the most sensitive upper limits yet, and for seven pulsars we are starting to probe an interesting regime within a factor of five of the spin-down limit. For the Crab pulsar and Vela pulsar we have surpassed the spin-down limit. From this we can say that, respectively, less than ∼1% and 10% of their spin-down energy loss is due to gravitational radiation. We can also say that there are no "mountains" on the Crab pulsar greater than ∼1 meter, and none on Vela greater than ∼10 meters. Among the other pulsars, we found eight more within a factor of ten of the spin-down limit. From the gravitational wave observations alone we can limit the "mountain" size for some of these to less than ∼1 mm, although the spin-down limit is more stringent for those pulsars.

When the current upgrades to the LIGO and Virgo detectors are complete we expect to be able to beat the spin-down limit for many more pulsars. This includes pulsars where we could limit the maximum mountain size to less than a few tenths of a millimeter! It also means we will be in a regime where we can make the first direct detections of gravitational waves from pulsars. 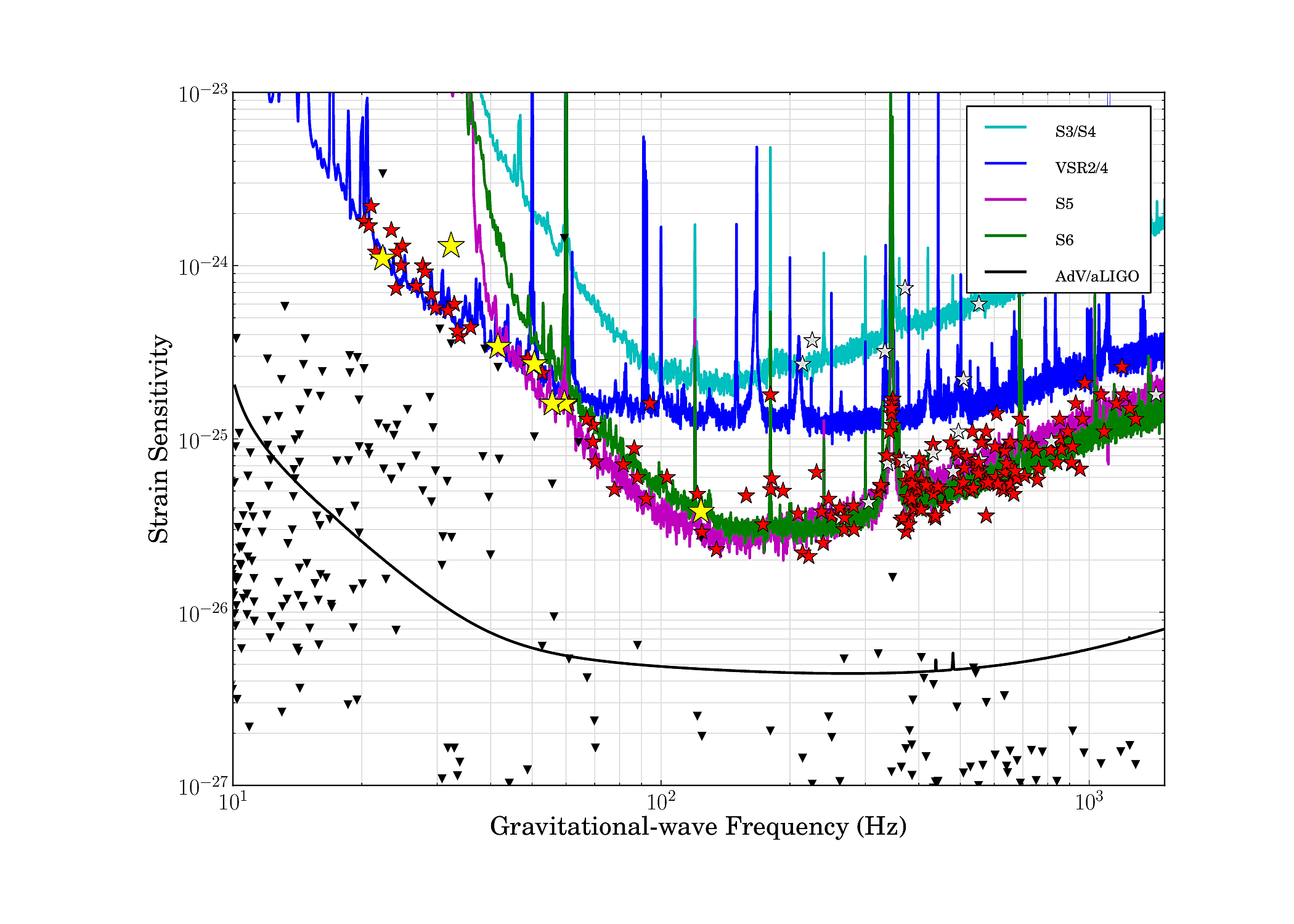 The stars in this plot show the upper limits on the gravitational wave strain amplitude for 195 pulsars using data from the LIGO S3, S4, S5 and S6, and Virgo VSR2 and VSR4 runs. The triangles show the spin-down limits for a selection of these stars. The curves give estimates of the expected sensitivity of the runs and also future runs with Advanced LIGO and Advanced Virgo. 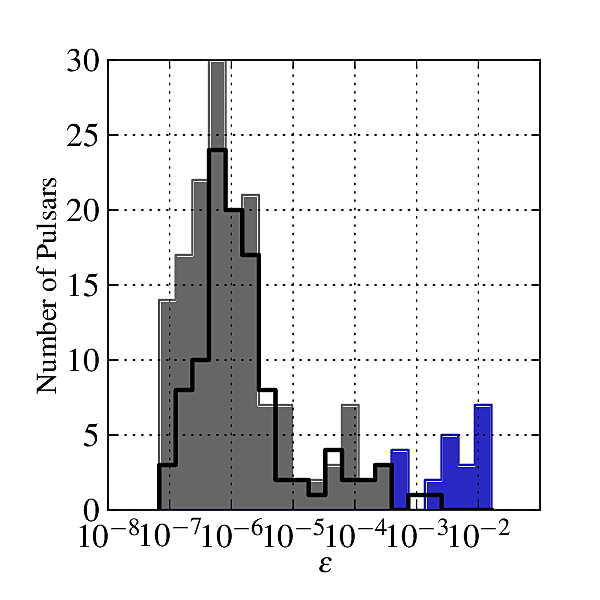 Histograms of the upper limits in terms of stars' ellipticities ε. The ellipticity can roughly be converted to a "mountain" size by multiplying by the approximate neutron star radius of 10 km (see Gravitational wave constraints on the shape of neutron stars for more detail). The filled grey histogram shows the results using the latest S6 LIGO data and Virgo VSR2 and VSR4 data, the filled blue histogram shows the result for several pulsars that just used Virgo VSR2 and VSR4 data, and the black line shows results using LIGO S5 data. 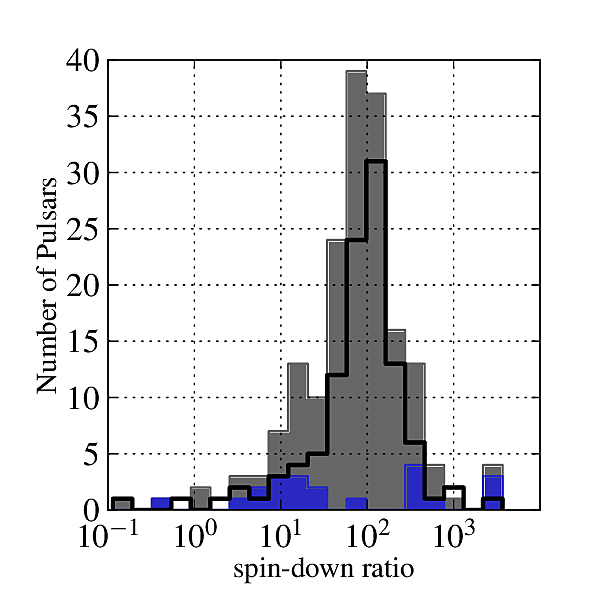 Histograms of the upper limits in terms the ratio of the observed upper limit to the spin-down limit. The filled grey histogram shows the results using the latest S6 LIGO data and Virgo VSR2 and VSR4 data, the filled blue histogram shows the result for several pulsars that just used Virgo VSR2 and VSR4 data, and the black line shows results using LIGO S5 data.