Several previous LIGO searches have used an approach called "multi-messenger astronomy" to improve our chance of detecting gravitational waves. By looking for gravitational waves and a different kind of signal coming from space at the same time and direction, we can gain a couple of advantages over just looking at one type of data. We can dig deeper into our data because we can ignore all the noise that isn't consistent with a gravitational wave from a specific time or direction. We can also learn a lot more about what's happening to the source of the signals when we have two completely different types, just as you can learn more about some terrestrial objects when you can listen to as well as look at them.

This is the first search in which we've looked for gravitational waves associated with radio bursts. If we could detect a gravitational wave and a radio signal from the same source, that could narrow down what type of object the source is. If the gravitational wave is strong enough to see its specific shape through the detector noise, that could narrow down the possible objects even further. LIGO, GEO and Virgo partnered with two radio telescopes. The Robert C. Byrd Green Bank Telescope is located in West Virginia and, with a diameter of over 100 meters, is the world's largest steerable single dish radio telescope. We looked at 27 short radio bursts that were found during searches for previously undiscovered radio pulsars during two of Green Bank's surveys. We also partnered with the Parkes radio telescope, which is a 64 meter single dish telescope in western Australia, in order to look at Fast Radio Bursts observed in the last few years. These are mysterious, very short pulses which look like they're coming from deep space far beyond our own galaxy. While not much is known about them at this point, they could be an entirely new class of astrophysical phenomena. The radio survey data we're looking at was collected at various times, as far back as 2007 and as recently as 2014.

Theorists have predicted a number of scenarios where short radio pulses and gravitational waves in the LIGO range could be produced simultaneously. A starquake on a neutron star is one example. Another would be the merger of two neutron stars. A short radio signal could occur from "spinning up" one of the merging neutron stars into a pulsar just before the merger. Alternatively, they could merge into a spinning pulsar-like hyper-massive neutron star for a few seconds after the collision. The creation of electromagnetic waves as the gravitational waves themselves move through the matter surrounding the merger is another possible way to make radio waves from a neutron star merger. Farther out in space, some theories predict that huge filaments leftover from the early universe called cosmic strings could create both gravitational wave and radio signals when they fold into a cusp or kink.

The searches in this paper didn't turn up any evidence for gravitational waves associated with the radio bursts we examined. We will keep searching with Advanced LIGO and other interferometers in the coming science runs. Meanwhile radio astronomers continue to investigate the origin of Fast Radio Bursts. As with other gravitational wave searches, the start of the advanced detector era means these studies are only getting started.

For more information on the figure, see the preprint on the arXiv. 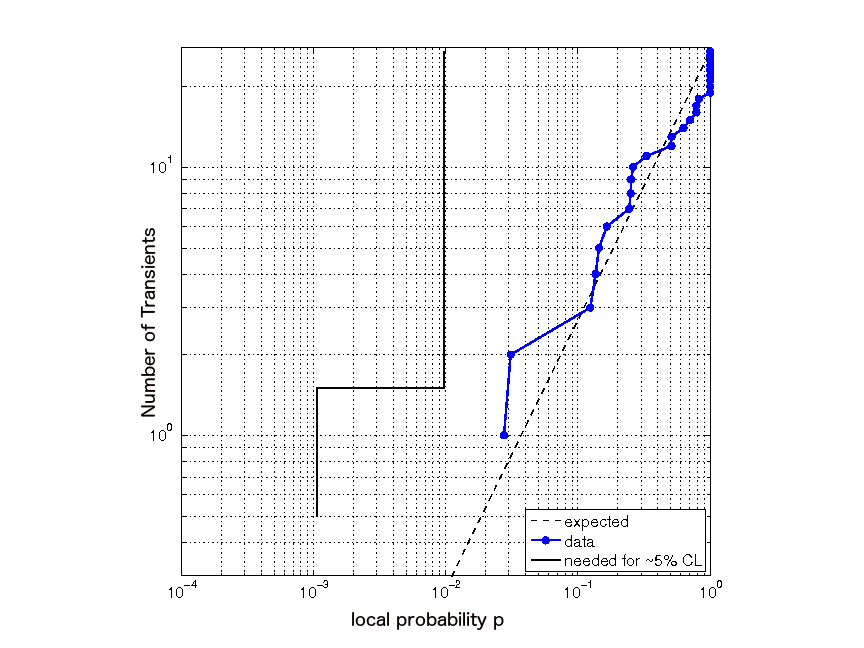 Because there is random noise in the detector, we usually find a candidate associated with each radio burst, which may be a gravitational wave or may be noise. In the figure above, the blue dots show the statistics of these candidates. On the average, noise would produce dots lying near the dashed line, but very rarely further left than the solid line - so anything over there would be evidence for gravitational waves. Since we saw nothing standing that far out from the noise, we conclude that there is no evidence of gravitational waves associated with this set of radio bursts.