All-sky search for continuous gravitational waves in the Virgo data

Gravitational waves are ripples of space-time propagating with the speed of light in the space-time itself. These waves are predicted by the general theory of relativity; indirect evidence supports their existence. Their direct detection by a global detector network remains a great challenge. Spinning neutron stars represent one promising class of gravitational wave sources. These ultra-dense bodies are born during supernovae -- the gravitational collapse and explosion of conventional stars.

Astronomers first discovered neutron stars as pulsars in the late 1960's through the use of radio telescopes. A pulsar sends out a constant beam of radio waves. Because the pulsar spins, the radio beam sweeps out a circle on the sky and creates regular pulses on earth-bound radio telescopes that lie in the beam path. To date astronomers have identified more than 2000 pulsars. Stellar evolution and population synthesis models suggest that our galaxy might contain as many as one hundred million or more neutron stars. With masses roughly equal to the mass of our Sun and radii of about 10 km, their densities approach a billion tons per teaspoon. The slightest imbalance in a pulsar's mass distribution could cause the star to lose energy by emitting continuous gravitational waves as it spins. The gravitational wave signal would decrease in frequency as the energy loss continues; the rate of change of the frequency is termed spindown. Some pulsars might possess a large enough mass deformation (a sufficiently big bulge on the surface) to produce a gravitational wave signal detectable by the LIGO and Virgo interferometers. Such a signal could provide insight into the pulsar's structure, for instance by clarifying the cause of the deformation. Do pulsars exist that lie within the reach of Earth-based gravitational wave detectors? To pursue this question, scientists recently used Virgo data to perform an all-sky pulsar search which spanned all sky positions and astrophysically interesting rotation frequencies and spindown rates.

This new search, using Virgo data collected in 2007, complements previous all-sky pulsar searches which used LIGO data. The Virgo and LIGO detectors differ in their noise characteristics, with Virgo being more sensitive in some frequency bands even though LIGO has had a better average sensitivity overall. Data analysts searched a frequency range from 100Hz to 1kHz and a frequency-dependent spindown range from about -3.2 (f0/100Hz) ⋅ 10-9Hz/s to zero (see the upper figure on the right). The study's key question revolved around frequency. Could the analysts discern the frequency of a pulsar's gravitational wave signal in the data, and could they see the tiny effect of the spindown? This frequency orientation requires that the data undergo a Fourier transform, a mathematical transformation that converts the time-based nature of the data to a frequency base. The task then becomes the identification of distinct frequencies that lie buried in the detector's noise across all frequencies. Analysts run computer codes that first compare the data to numerical models, searching over source frequency, spindown, and sky position, and then measure the agreement between the data and the models. The models need to contain all possible frequencies of interest. Each unique pulsar sky position creates a Doppler shift on the pulsar signal that slightly changes the signal's detection frequency. Consequently, all possible frequencies need to be tested across all sky positions and at all possible spindown rates.

The computing requirements are enormous for an all-sky search! To simplify the analysis, the team divided the data set into 1-Hz frequency bands and two-day segments. Each segment yielded a set of candidate signals. Thirty-two billion candidates arose from the analysis of the full data set. In order to find true gravitational wave signals among the candidates, the team compared the frequency, sky position and spindown for a candidate signal to the values of these parameters for candidates in additional two-day segments, since a true signal should persist from one segment to another. The team found no statistically significant coincidence among the candidates. Consequently, the search has not revealed any gravitational wave signals. This is not unexpected given our understanding of the mechanisms of gravitational radiation from pulsars and the sensitivity of the current detectors. The effort, however, established the sensitivity of the search i.e., the amplitude of the gravitational wave signal that could be confidently detected. The lower figure on the right shows the amplitudes of signals that would be detected for each 1 Hz band. For a large part of the overall band, 90% of the signals with an amplitude of 5⋅10-24 would have been detected.

Currently the LIGO and Virgo interferometers are undergoing upgrades to advanced configurations that should improve the detectors' sensitivities by an order of magnitude. Virgo's experience in seismic isolation techniques will help in achieving this goal. A tenfold increase in sensitivity means a thousand-fold increase of the detectors' observable volume of space. Improvements in data analysis methods and increases in computing power will further boost the chances of making detections with these advanced instruments. Direct gravitational wave detections will offer an important test of general relativity and will provide a new astrophysical probe of the structure and evolution of the Universe. 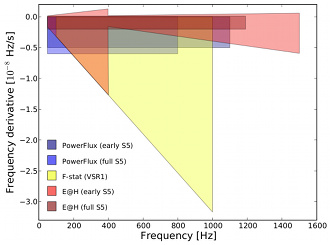 Comparison of the parameter space in frequency - spindown plane searched in the analysis of first Virgo science run (so called VSR1 run) presented in this paper (yellow shaded area) and recently published PowerFlux and Einstein@Home searches of the LIGO S5 data. 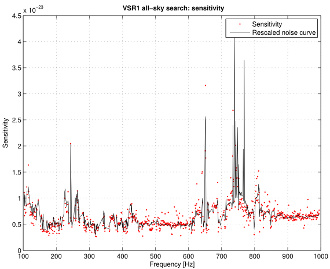 The 90% confidence sensitivity of the all-sky search of VSR1 data in the band from 100Hz to 1kHz. The red dots show the source strain amplitude h0 for which 90% of sources are confidently detected by our pipeline. The thin line is the rescaled instrumental noise curve.