The LIGO detector geometry as stored in the LALSuite analysis software consists of the following for each detector on the Earth: the location of the detector and length and orientation of its arms. For the detectors active since 2005, these are

(The azimuth for each arm describes the local compass direction along the arm. For instance, N36°W means a direction between local North and West, 36 degrees away from North.)

These locations and directions look like this, on a map of the Earth: 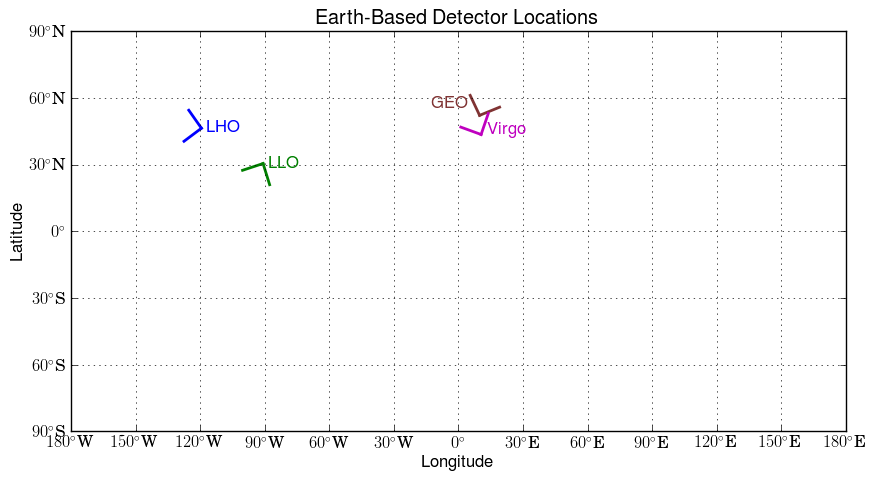 Note that this map only indicates the directions of the arms, not their length. (So the H1 and H2 detectors are both represented by the same location and orientation.) Also, the arm directions do not take into account any map projection effects; they simply indicate the direction of the arms relative to local north.

A detector records a positive strain when its X arm becomes longer, relative to its Y arm. It's useful, therefore, to represent the geometry with outward pointing arrows along the X arm and inward pointing arrows along the Y arm, indicating the sort of deformation that is associated with a positive signal in the detector. Each detector responds optimally to a signal coming from directly overhead. The relation between the latitude and longitude of a detector and the right ascension and declination of the sky position overhead depends on the sidereal time of the observation. At the time of GRB051103, which was GPS time 815045155, 2011 Nov 3, 09:25:42 UTC, the Greenwich Mean Sidereal Time was 12:16:40, so we can represent the detector locations and responses to their optimal sky positions like this (note that at Greenwich Mean Sidereal Time 12:00:00, 12 hours right ascension is directly overhead at 0 degrees longitude): 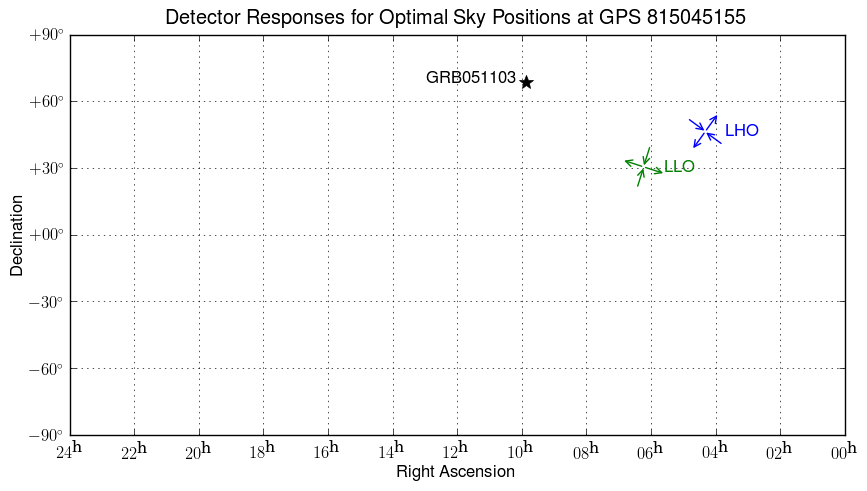 The relative positions of LLO and LHO appear to be reversed compared to the map above. This is because it is conventional to map locations on the Earth with East on the right and West on the left, so that longitudes increase from left to right, as though we were looking down on the Earth from above. For locations on the sky, however, we flip the picture to simulate the view from "inside", with East on the left and West on the right so that right ascensions increase from right to left. The sky position of GRB051103 (a declination of 68 degrees and a right ascension of about 10 hours) is also shown for reference.

Since GRB051103 was not directly overhead at either detector, any associated gravitational waves would have produced a smaller signal in each detector than for a corresponding source in the optimal sky position. For example, if the GRB was caused by a compact object binary whose orbital plane was seen face-on by the Earth, the resulting circularly-polarized gravitational waves would produce a signal whose amplitude in H2 would be .726 of that for a similar source located directly overhead at LHO, and whose amplitude in L1 would be .657 of what it would be if it were directly overhead at LLO. Thus the blue arrows are drawn with a length of .726 and the green arrows with a length of .657 of the radius of the dotted circle. 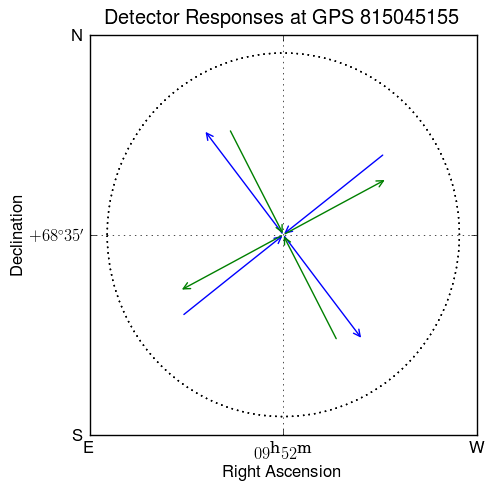 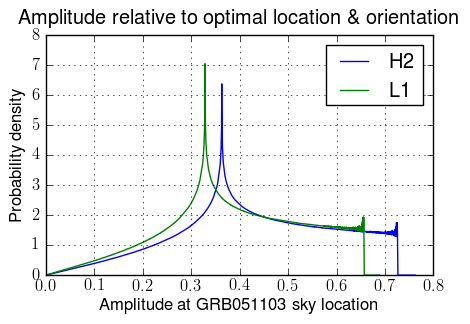 Averaging over the unknown binary orientation gives an amplitude .593 times the face-on value, i.e., the average expected amplitude for a binary of unknown orientation at the GRB051103 sky position is .431 in H1 and .389 in L1, relative to that from a face-on system directly overhead. Note, though, that due to beaming of gamma-ray bursts, the orbital plane for a binary inspiral associated with a GRB seen at the Earth is more likely to be face-on than that for a randomly-oriented system. These factors are summarized in the table below, which compares the amplitude of gravitational wave from a binary at the GRB051103 sky position to the optimal (overhead) sky position, for both optimal (face-on) and average binary orientations.