NOTE: This is an EXAMPLE of the data products that the LIGO Scientific Collaboration and Virgo Collaboration might release for their first gravitational wave transient detections. This particular event was not a real detection; it was a "blind injection". For more detail and background, see the GW100916 news release.

This page, and all the documents and information linked therein, are intended for release to interested scientific colleagues. We welcome your comments on what is useful to have on a page such as this. Please send your feedback to datainfo@ligo.org.

This page has been prepared by the LIGO Scientific Collaboration (LSC) and the Virgo Collaboration to inform the broader community about an interesting event observed in the gravitational-wave detectors, and to make the data around that time available for others to analyze.

Data from the gravitational-wave detector network is analyzed in several ways. This page concerns an event identified by multiple analysis pipelines which search for gravitational wave events at all times in the available gravitational-wave data. The event time is 968654557.955 GPS == Sep 16, 2010 06:42:22.955 UTC, and thus it has been assigned the name "GW100916". At that time, the 4-km LIGO Hanford and LIGO Livingston detectors, the 3-km Virgo detector, and the GEO 600-m detector were all collecting data in "science mode" as part of the LIGO-GEO S6 and Virgo VSR3 science runs. Analysis revealed a highly significant event consistent with the coalescence (inspiral and merger) of two black holes or a black hole and a neutron star.

Significance of the event

Normally this section would list (and provide links to) published papers and preprints about this event as they become available.

Although a paper draft was produced by the LSC and Virgo Collaboration, since this particular event is actually a "blind injection", that draft will not be published. For more details, please email datainfo@ligo.org.

More information on the analysis methods used to identify this event are here:

Strain time series from the LIGO Hanford, LIGO Livingston, and Virgo detectors, sampled at 16384 Hz and high-pass filtered to remove the dominant noise below 30 Hz for the LIGO detector data and 10 Hz for the Virgo data.

The data provided here is in ASCII format. The format for routine and more extensive data releases is under discussion and may well differ from this.

Plot and ASCII dump of the one-sided detector strain noise amplitude spectra around the time of the observed event: LIGO Hanford in red, LIGO Livingston in green, Virgo in magenta, and GEO 600 in gray. The vertical scale is strain per sqrt Hz. At these noise levels, an optimally located and oriented (5,5) Msun binary is expected to give a matched-filter signal-to-noise ratio (SNR) of 8 at distances of 120, 130 and 30 Mpc in LIGO Hanford, LIGO Livingston and Virgo respectively. The diagonal lines show the expected strength of binary coalescence signals observed in the LIGO Hanford (solid) and LIGO Livingston (dashed) detectors with SNRs of 15 and 10, respectively.

With a decent pair of earbuds or headphones, the "whoop" or "chirp" that is GW100916 can be heard around 17 seconds into the recording. In the Livingston data you can also hear a short glitch (unrelated to the GW100916 signal) around 8 seconds into the recording. Each is whitened and bandpassed h(t). Caution: This can be loud if you are not careful, so start playing the file and adjust the sound level before putting on the earbuds/headphones.

Spectrograms are time-frequency plots of the sort shown above. See their definitions and further plots.

The Virgo detector is located in the countryside near Pisa, in the Comune of Cascina. The construction of Virgo was completed in 2003. Virgo is a Michelson interferometer with two orthogonal Fabry-Perot arms of length 3 km, and a power recycling cavity. Virgo is presently being updated to give a new instrument called "Advanced Virgo" in the same infrastructure. It is planned to increase the sensitivity by one order of magnitude hopefully on the same schedule as Advanced LIGO.

The Virgo detector is now operated by the Virgo Collaboration which involves groups coming from 19 European laboratories (8 Italian, 7 French, 1 of Hungary, 1 of Netherlands, 1 of Poland and an EGO (see below) team). The relevant institutions are CNRS (France), INFN (Italy), NIKHEF (The Netherlands), RMKI (Hungary), and PAN (Poland). The collaboration is organized by the Virgo Steering Committee (VSC), composed of representatives (or leaders) of all 19 groups. The collaboration is represented by the Spokesperson, elected by the VSC for three years.

The European Gravitational Observatory (EGO) is a consortium created jointly by CNRS for France and INFN for Italy in order to insure technically the operation of the Virgo detector, and to manage the funding by these two institutions. EGO is in charge of the maintenance of the detector, of a part of the R&D and will assist the construction of Advanced Virgo. Its governing body is the EGO Council, composed of members nominated by the funding institutions. The Council appoints a Director who is the representative and chief executive of EGO. 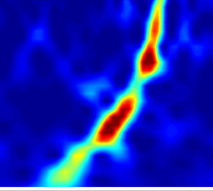 Note: This event was a "blind injection", i.e. a simulated signal inserted into the data streams of the detectors. This page is provided as an example of how a real gravitational wave event may be presented in the future.
Connect with us: